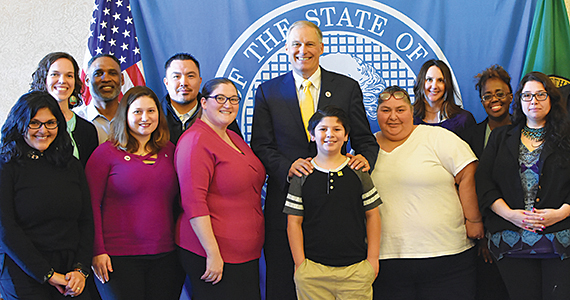 We work to bring the voices of people of all ages and income levels into the political process to create opportunities for everyone to thrive.

A just world is possible when we speak up together.

Solid Ground is a catalyst for social change. We engage and support communities to advocate for a world where everyone can thrive. We can’t solve poverty without the voices of those who experience it – so we support people to share their experiences with those in power and advocate for equitable policies.

No one organization can end poverty or undo racism and other oppressions. We develop strong collaborations with partner agencies and coalitions to build movements that make our community stronger. We organize locally and regionally – and across Washington state as well through our advocacy partner, Statewide Poverty Action Network – to improve resources to support people moving out of poverty.

Poverty Action mobilizes thousands of community members and organizations to build grassroots power to end the root causes of poverty and create opportunities for everyone to prosper.

Envisioning a state where people of all income levels fully promote and participate in building the fabric of socially, politically, and economically just communities, they:

Our society operates under a false narrative about poverty. We work to transform that narrative by shifting the focus from personal failings to structural barriers, such as laws or policies that marginalize people and communities.

As Solid Ground’s advocacy partner, Poverty Action maintains their own website and legislative agenda highlighting campaigns such as:

Poverty Action organizes through a racial equity lens, drawing attention to the relationship between systemic oppression and poverty. They take direction from the communities in our state most impacted by poverty, and their Board of Directors is comprised of and accountable to people with low incomes and people of color.

Sign Up for Poverty Action Network News
to learn about and take action on issues that build equity in our state.

At nonprofits and other organizations around the U.S., it’s become common practice to acknowledge that the land we all live on was stolen from the displaced and marginalized Indigenous peoples of this continent. In meetings and at galas, we occasionally make a point to state that the descendants of those peoples are still among us, bearing the weight of decades of oppression.

At Solid Ground, we know this acknowledgement is meaningless if it’s not coupled

I-135 and the promise of a more inclusive Seattle

In 2020, the year a deadly pandemic began to ravage our state, an estimated 40,000 people in King County were left without homes – living instead in cars and tents, on friends’ couches, or in homeless shelters¹. If you gathered them all together in one place, you’d have a community the size of Issaquah.

Why Solid Ground supports the Duwamish fight for federal recognition

At Solid Ground, we know that to solve poverty, we must recognize the systemic oppression and institutional barriers that rob people of their agency and keep them from thriving. For some people, that oppression spans decades or centuries – its harm compounded with each new generation. Our work at Solid Ground starts with acknowledging that harm.